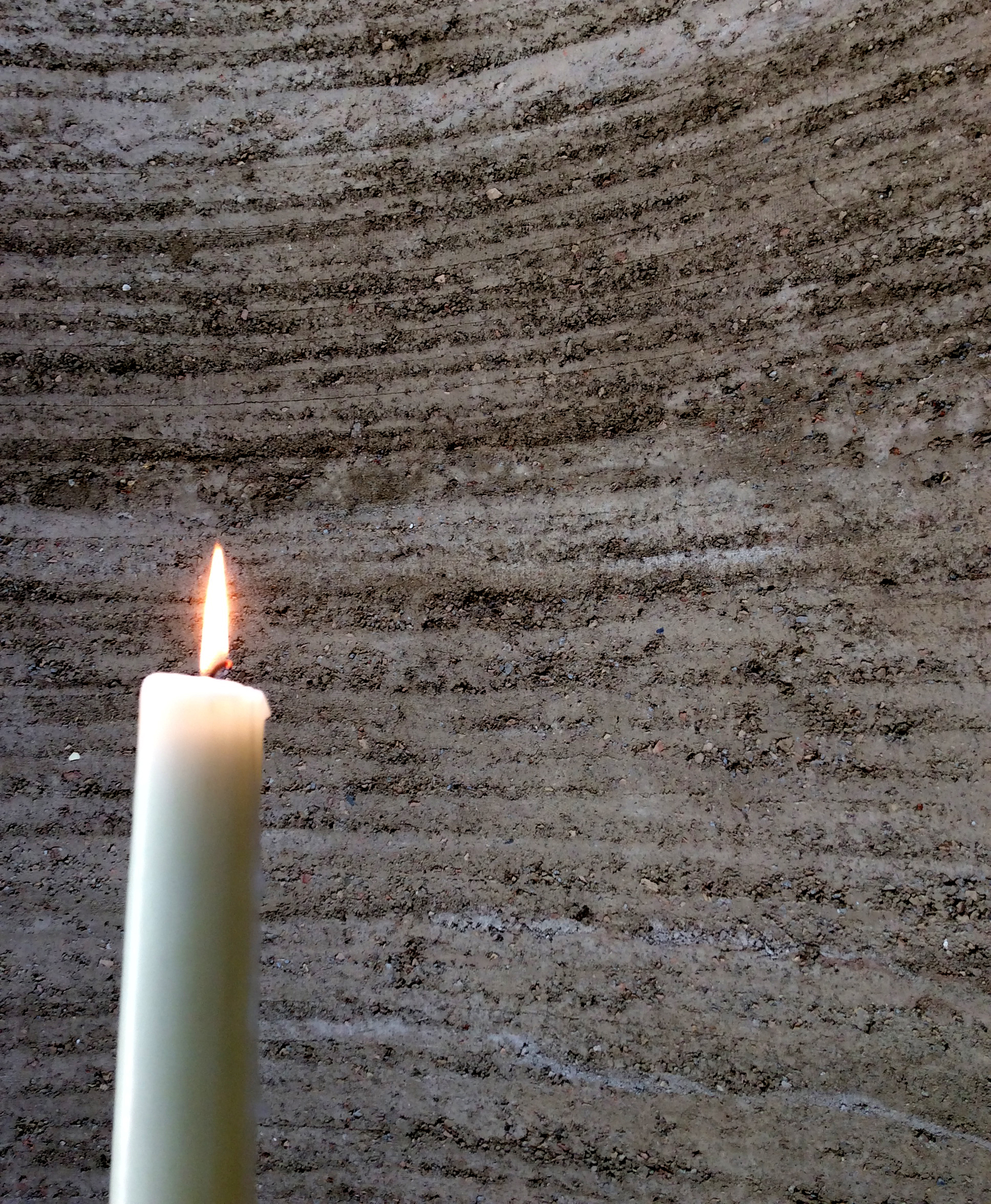 Museums of Misery : When Less is More

I learned a while ago that a large number of visitors to the Imperial War Museum in Manchester have complained about feeling upset by some of the audio-visual material transmitted during their visit.

Given the events of the 20th century, Berlin has more than its fair share of misery to recount and while staying here on the Fellowship Iâ€™ve found simply choosing which of the dozens of terror and horror sites to see is a major ordeal in itself. To kick off I decided on the big architectural hitters of Libeskind's Jewish Museum and Peter Eisenman's Holocaust Memorial followed by the more modest Berlin Wall Memorial, a curated outdoor route which traces the impact of the Berlin Wall on a particular neighbourhood. 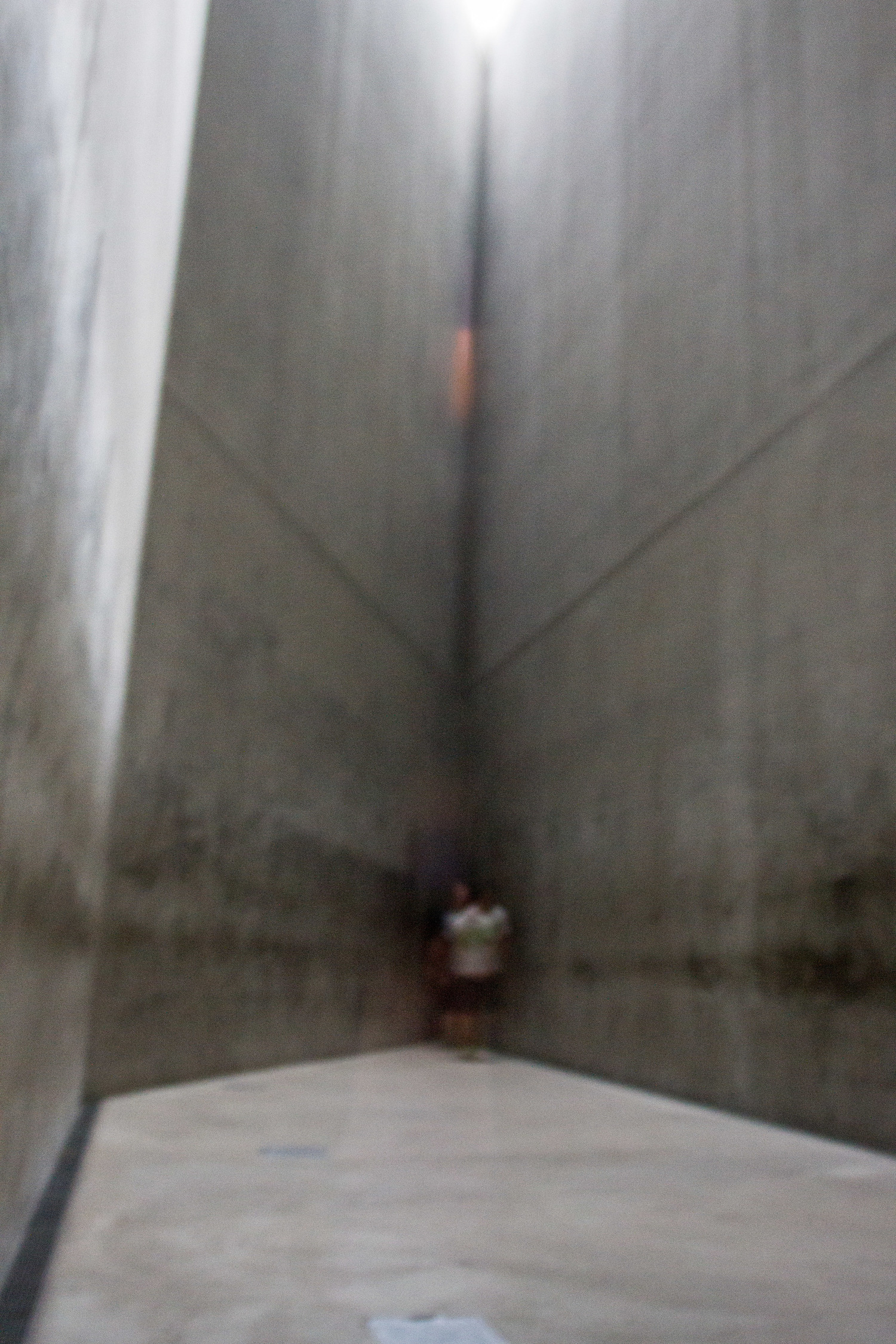 The Holocaust Tower: the termination of the Axis of Holocaust which leads only to darkness and sounds audible from the street outside. Image by John Dawson 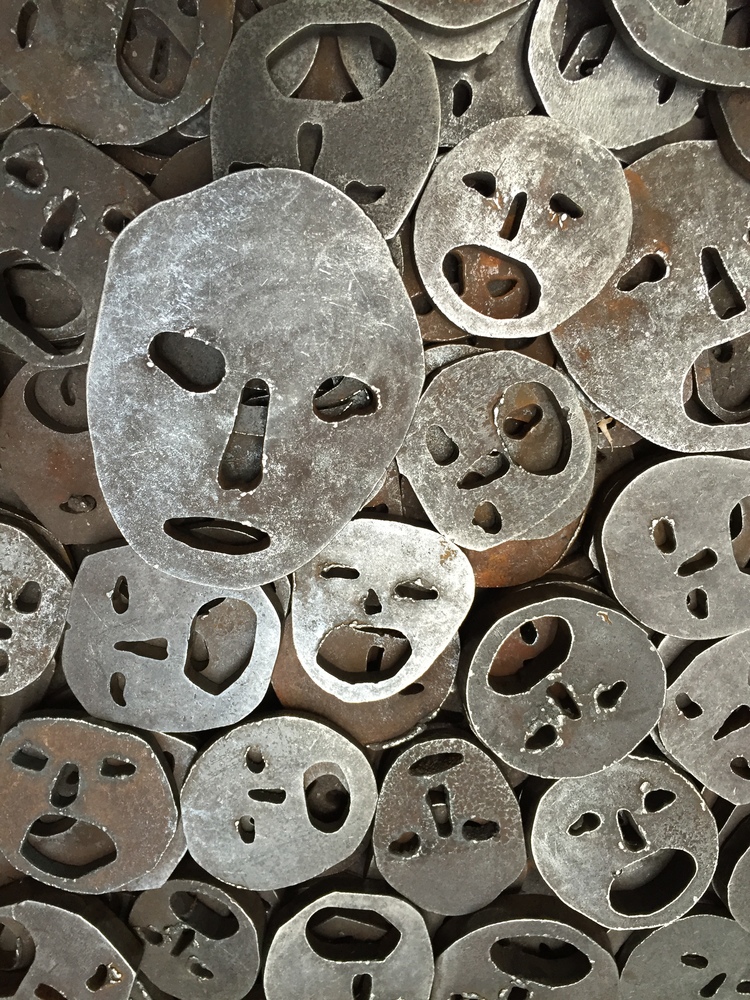 "Shalecht" or "Fallen Leaves" by Israeli artist Menashe Kadishman in the Memory Void. Ten thousand open faces represent the lost lives of Jews murdered in the Holocaust in an ocean of silent screams. These empty faces are given voice when visitors walk across them, creating a shrill, terrifying and uncontrolled racket like a kind of death music. Visitors both release the voices of the dead but also crush their faces as they walk across them. One of the most powerful experiences I've ever had in a museum or art gallery.

To my great surprise, (and with the important exception of two specific zones of the Jewish Museum), I found the external memorials to be more engaging and more moving than the highly wrought conceptual scheme by Libeskind. Of course Iâ€™m comparing apples with pears here but at their core they are all telling stories of terror, fear, prejudice, control and all are designed to engage with visitors who know a little or a lot about their subjects.

The Jewish Museum is a highly complex and stunningly clever building but â€“ dare I say this? â€“ the architecture and the content are not happy bedfellows. Libeskindâ€™s scheme is an expression of absence and loss: an absence of Jewish lives through wholescale murder or forced emigration. Where once there was a strong Jewish community in Berlin now is an empty space.

The narratives of absence, of torn fabric, of disruption are expressed at every turn and the subterranean space is haunting with very few objects on display. Elsewhere, the Holocaust Tower and the Memory Void are deeply moving, again for their expression of absence and repression. But that is only a fraction of the museum. I wondered if Libeskindâ€™s building should be left empty of exhibits to express its ideas without the additional and contradictory job of telling the story of 2000 years of Jewish History.

The Holocaust Tower: the termination of the Axis of Holocaust which leads only to darkness and sounds audible from the street outside. Image by John Dawson

The conventional museum scenography of the main exhibition, which is much too long and lacking any architectural narrative of its own, battles against the disjointed, angled and asymmetric spaces of Libeskindâ€™s concept. So either the architectural narrative of the building is too overpowering and leaves no room for the important stories of Jewish history or the exhibition designer is failing to live up to the great challenge set by such a strong narrative space. Whatever perspective you choose, the result is the same: a lack of dialogue between content and space. The visitor comes away feeling overwhelmed, and frustrated at the lack of connection to most of the stories or the lives being narrated. 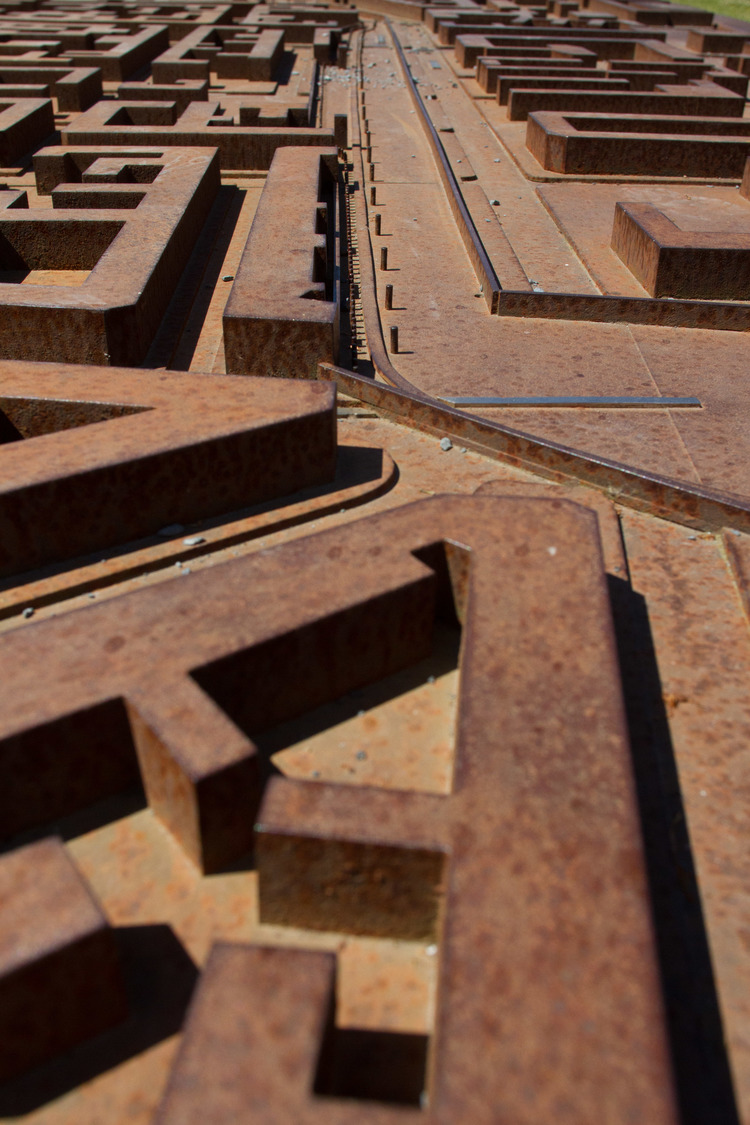 Outdoor corten steel model on Bernauer Strasse showing the line of the Berlin Wall through the Prenzlauer Berg neighbourhood. Image by John Dawson

Iâ€™ve found this relationship between architecture and content to be surprisingly contested and is at the heart of my work to reimagine museums. In contrast to the profound conceptual ambition of the Jewish Museum, the Berlin Wall Memorial tells a more focused tale and its architectural expression is moving precisely because of its restraint.

The Power of the Real

Tracing the route of the actual wall was a powerful experience in itself. Seeing the apartment blocks from whose high windows 80 year-old Olga Segler fell to her death, and many more trying to flee across the border, hearing the voices of experience of life in the GDR and seeing the route of the escape tunnels it was easier to imagine what life was like there. 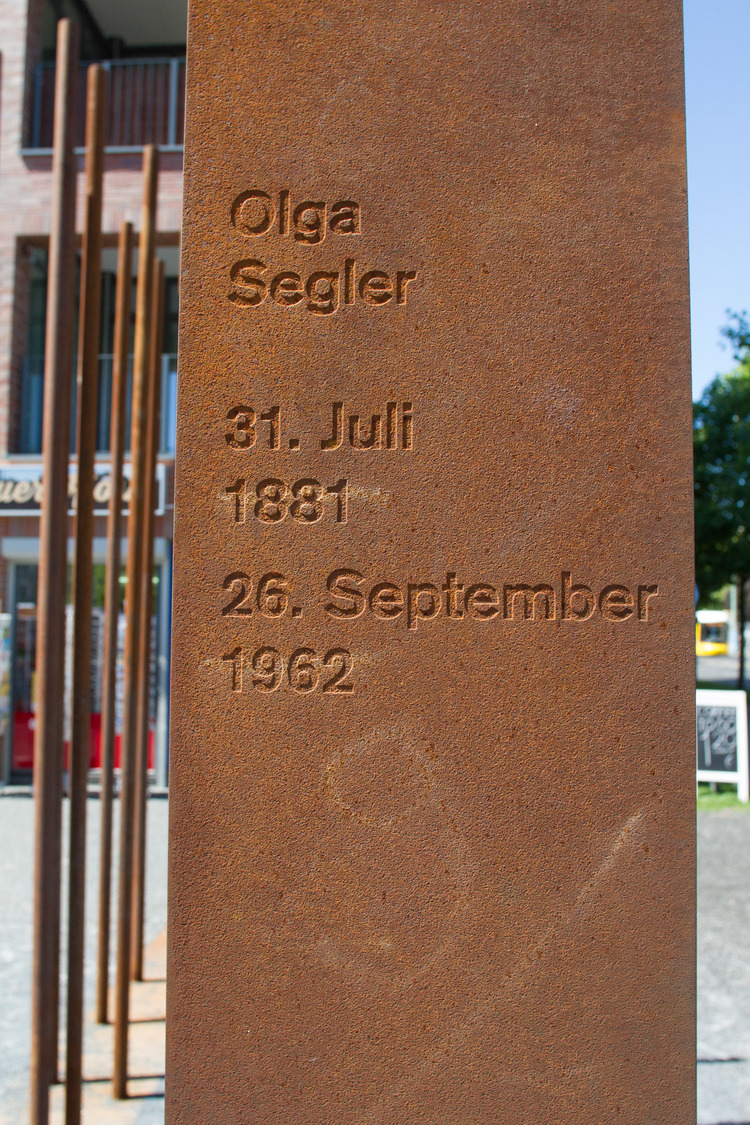 But the power of the real is not always or necessarily enough and the important question is how to interpret that real place, what to impose, what to imply, how to edit the manifold stories that emerge there. A high point on the tour is a visit to the Chapel of Reconciliation. A breath-takingly beautiful rammed-earth building which marks the site of a 19th century church destroyed in the 1980s to allow the East German authorities to widen the border patrol. Memorial services are held daily to remember the many victims of the Berlin Wall. Sitting in the quiet oval chapel I could almost hear the voices and chaos of that time and was deeply moved at such an explicit and unvengeful intervention. Architects Peter Sassenroth and Rudolf Reitermann worked with Austrian rammed earth specialist Martin Rauch to create this sanctuary, a contemplative space chock-full of narrative and meaning while being wonderfully restrained and minimal. 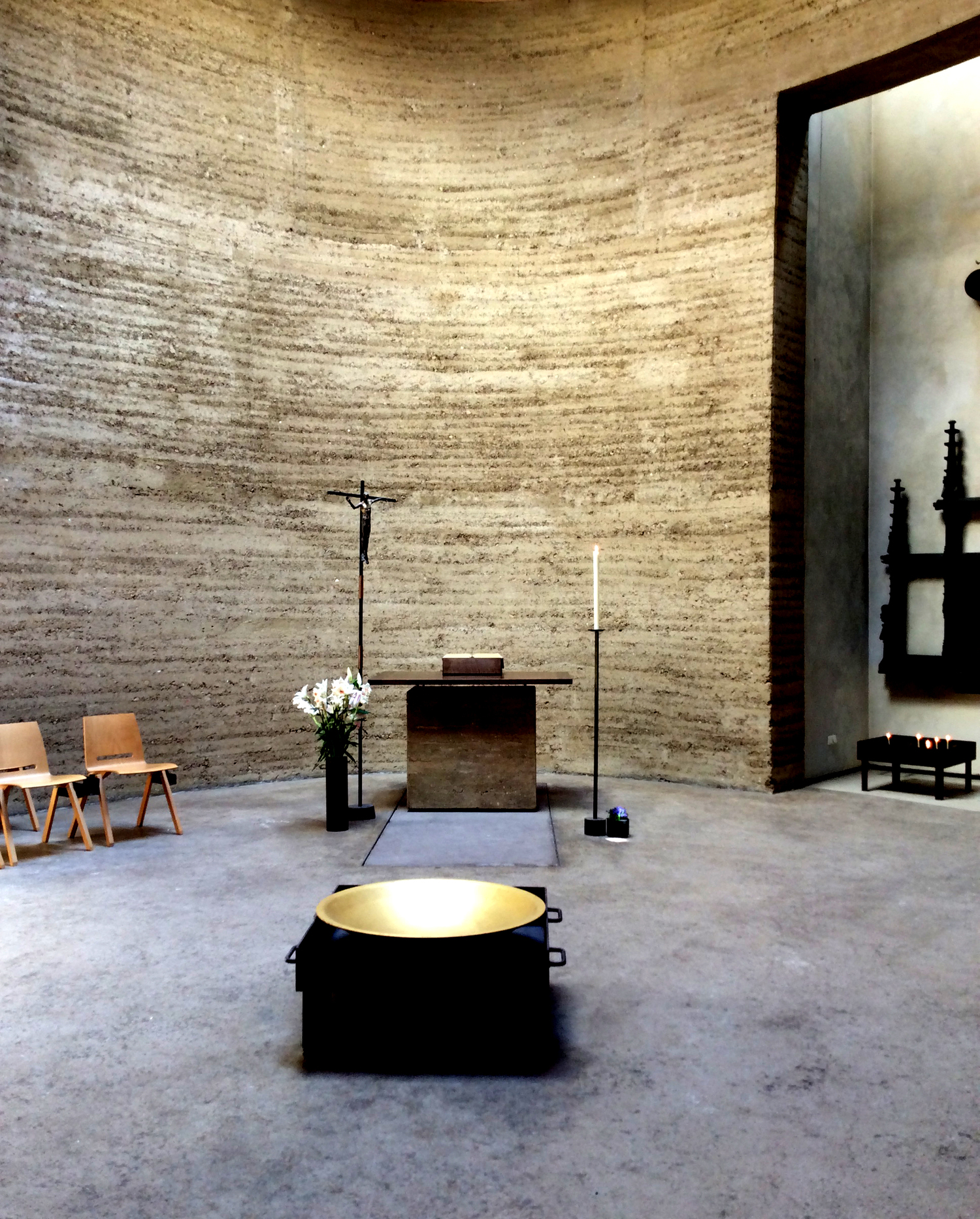 Interior of the Chapel of Reconciliation on Bernauer Strasse. 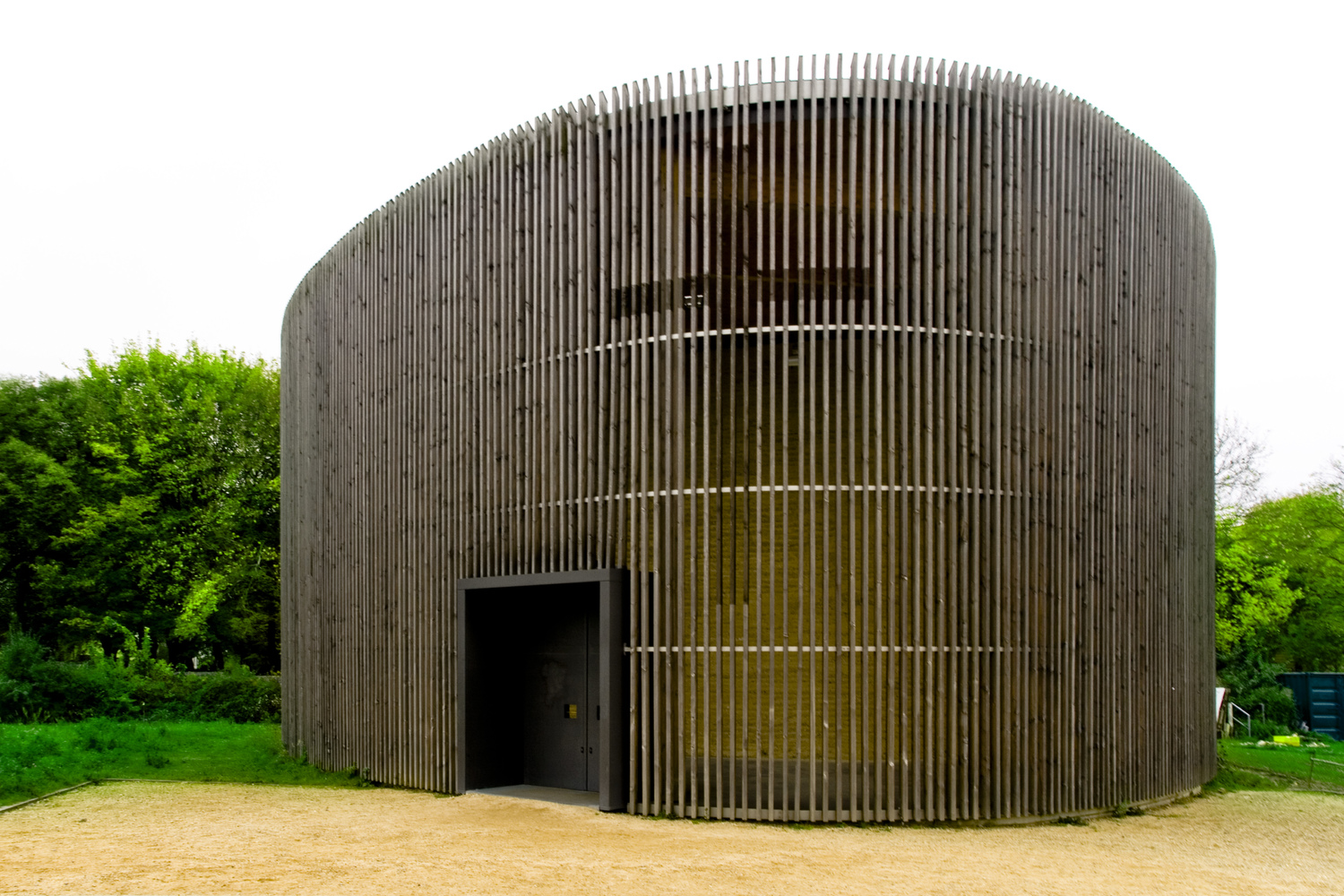 The Confidence of Abstraction

The power of the real is often best translated through embodying an idea rather than representing it and this takes more courage. Here, the route of the wall could have been replicated but instead it is marked by dual lines of corten steel poles. They have a strong presence but are permeable, artistic structures through which you can see trams passing and children cycling along the pavement. They are both heavy and light at the same time and seem to express the hideous complexity of the Cold War while beautifully embodying the ghost of the Wall. 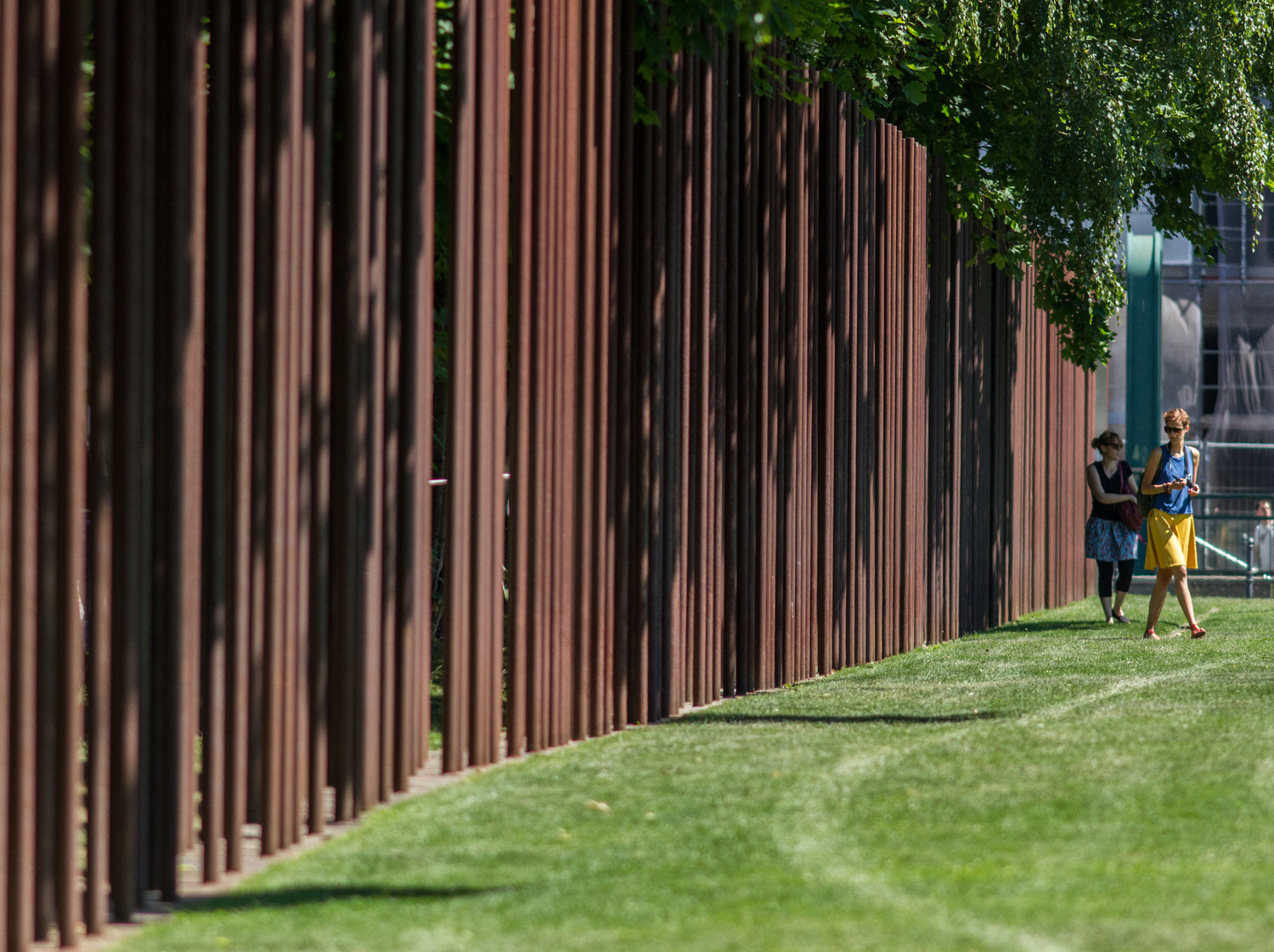 Dual rows of corten steel poles mark the route of the Berlin Wall along Bernauer Strasse. Image by John Dawson

Equally expressive, without having recourse to reconstruction, is a corten steel watch tower, simply constructed from 4 right angles shooting impossibly high into the sky. Here the material is less dynamic but feels intransigent and its endless height seems to offer the authorities an all-seeing gaze over the neighbourhood. 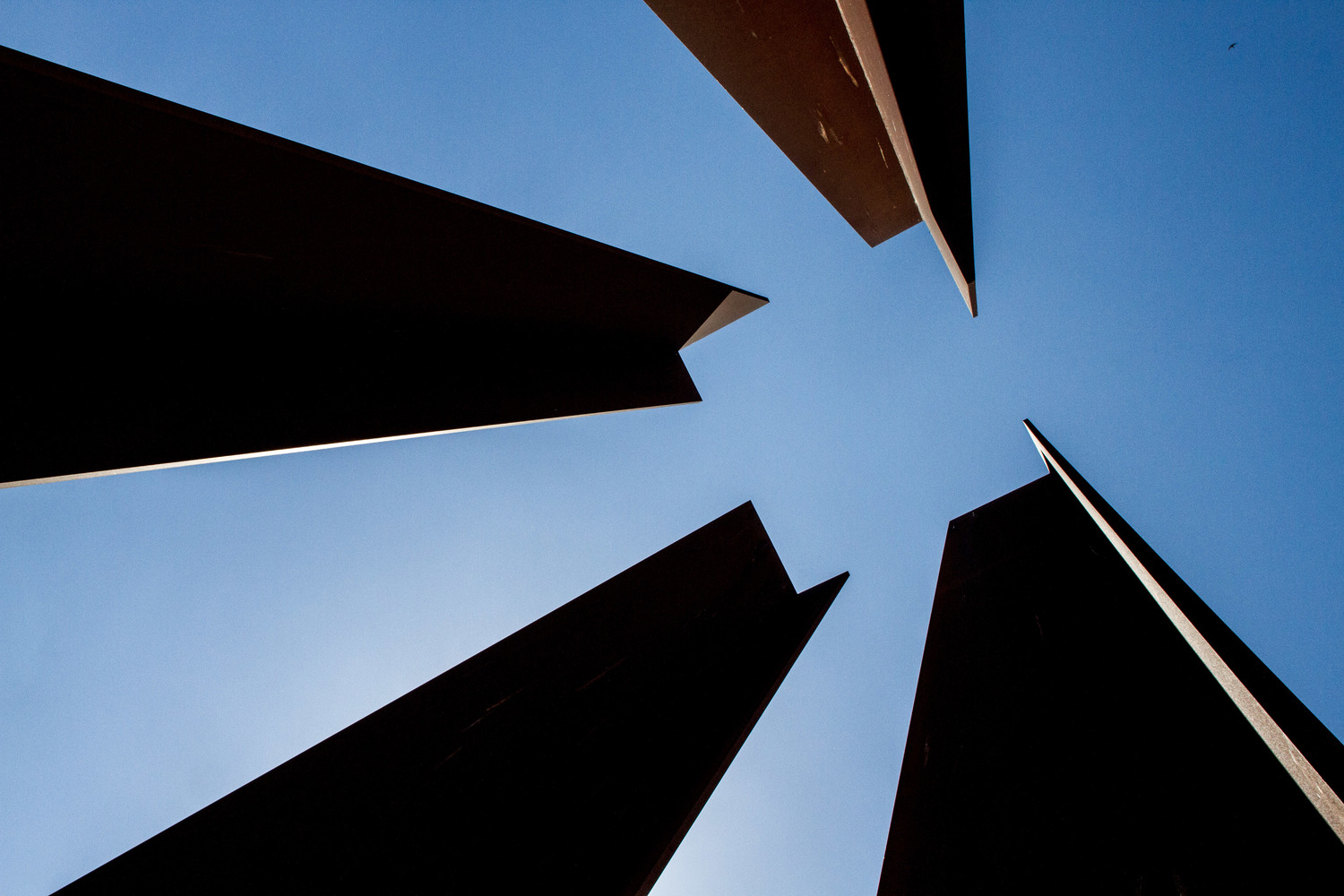 Abstraction in corten steel of the much-feared and highly-effective watch tower on Bernauer Strasse. Image by John Dawson

Simple, allusive and restrained interventions along the 2km route of the memorial were enough to evoke 20 years of mayhem and repression that destroyed many lives and ruptured a city for generations. By contrast, the Jewish Museumâ€™s complex forms and exhibitions are designed to evoke 2000 years of history â€“ a much more difficult task. While there is no neat solution to spatial narratives, I come away persuaded of the need to create space for the power of the imagination and of the maxim that, not only in architecture but in storytelling too, less can so often be more. 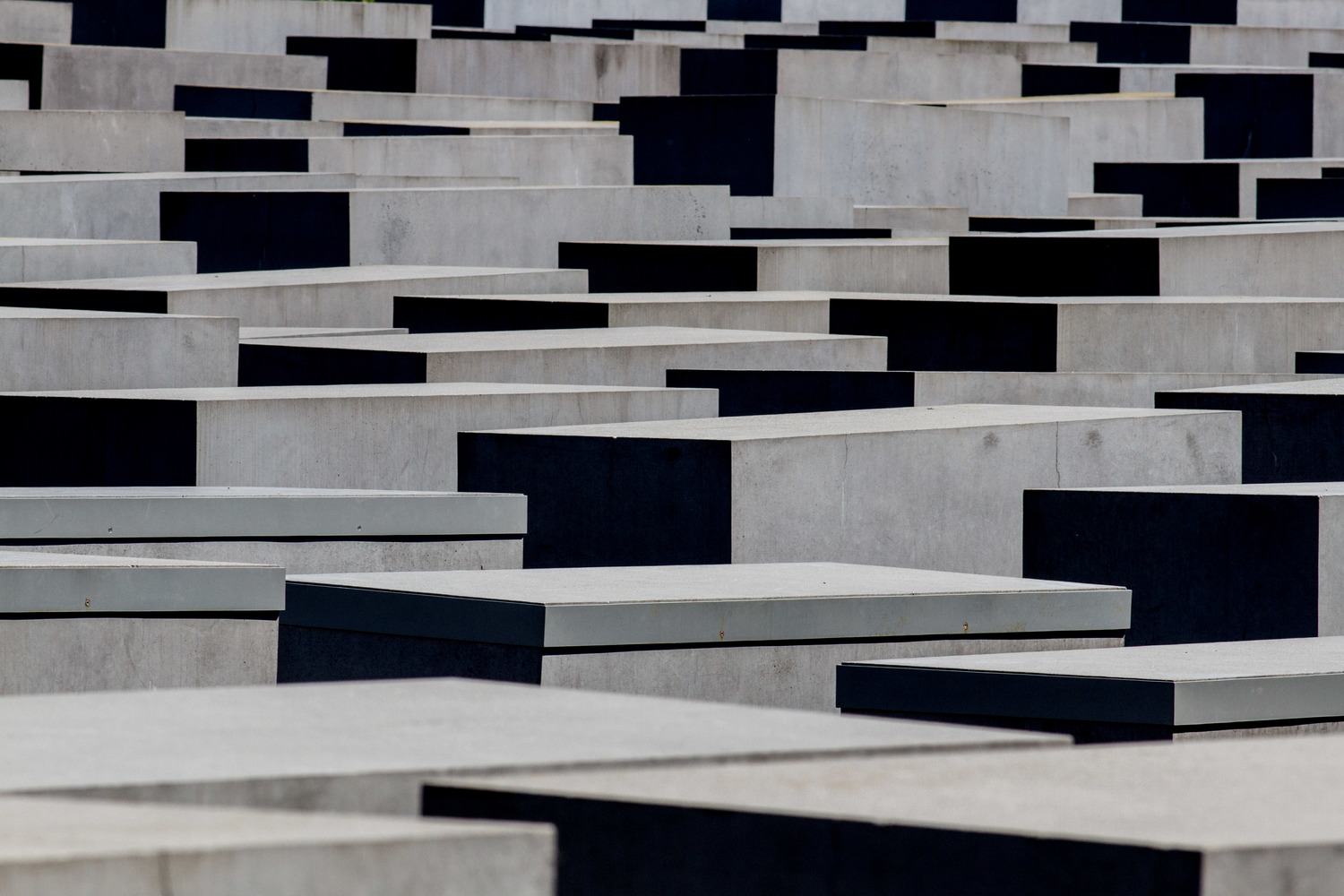 Field of Stelae known as the Holocaust Memorial by Peter Eisenman. The austerity of the structures, their labyrinth and repetition are powerfully emotive yet very understated. A separate exhibition centre provides documentary archive and layers of story that are only hinted at by the memorial itself. Image by John Dawson